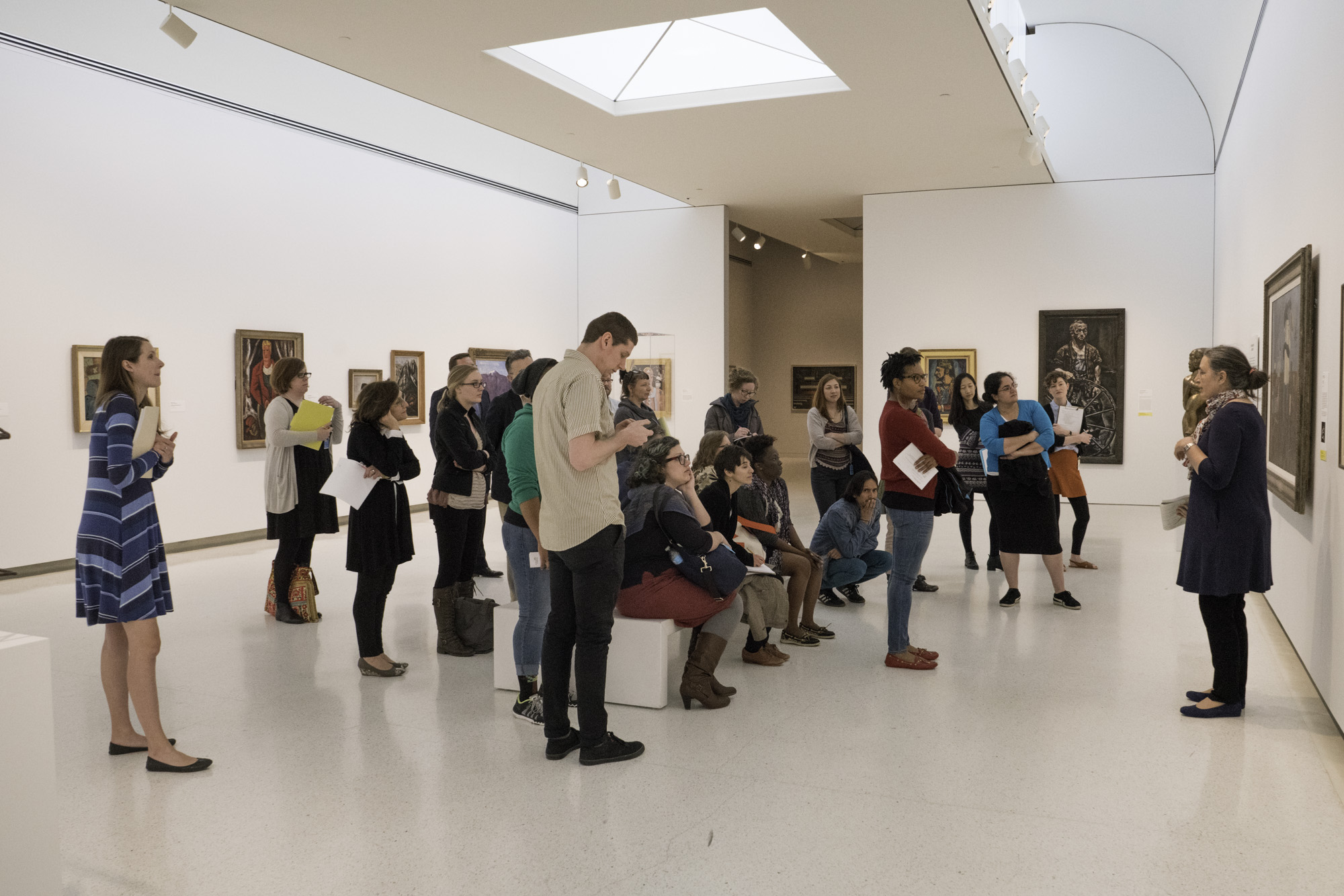 Gretchen Holtzapple Bender is assistant chair and director of undergraduate studies for the Department of History of Art and Architecture. The recipient of multiple awards for her teaching and advising, most notably the Chancellor’s Distinguished Teaching Award, Dr. Bender has played a central role in redesigning the department’s core curriculum including her signature course introduction to World Art, and in establishing the Museum Studies minor and the Milton Fine Fellowships in Museum Professions.

Caitlin Bruce is Assistant Professor in the Department of Communication. Her research broadly explores how public art functions as a vehicle for civic participation in transitional and transnational contexts. She draws from affect studies and critical theory as well as ethnographic material to account for the ways in which public art scenes in Mexico, France, and the U.S. enable spaces for encounter. This year she has organized, with Rivers of Steel and others, a series of public dialogues and youth education initiatives in Pittsburgh involving local and international graffiti artists.

Shirin Fozi (co-facilitator) is Assistant Professor of Medieval European Art and Architecture in the Department of History of Art and Architecture. While currently completing a book on German medieval funerary monuments, she is also broadly interested in the ways that modern notions of national identity have shaped and distorted our understandings of earlier practices of artistic exchange across Europe and the Mediterranean. She has worked in several museums including the Museum of Fine Arts in Boston and Dunbarton Oaks in Washington, D.C.

Christiana Harkulich is a PhD candidate in the Theatre Arts Department completing her dissertation, "Standing Between Reservation and Nation: Indigenous Performance in North America after the End of the Indian Wars." Her study focuses on Native American women's performances in the twentieth century that make visible the border between white and native cultures, and in so doing, alter our understanding of history. Christiana is also a practitioner whose credits include a performance installation piece entitled Kyooreasade (based on the novel The Night Circus), Sabina Berman's The Mustache and Psycho and Soma (director), and The Rivals: A Drag Comedy for To The Wall Productions in Philadelphia (producer).

Treviene Harris is a PhD student in the English Department interested in the ways color, race, class, and gender intersect with and inform the production and circulation of Caribbean popular culture. She is broadly interested in how knowledge is constructed in authorized sites such as museums, and in creative interventions that “talk back” to these sites of authority, especially interventions that may take nontextual forms such as sound.

Aaron Henderson is Assistant Professor in the Studio Arts Department. His videos and installations examine the personal, cultural and political ramifications of all action, from intimate gestures to displays of super-human acrobatics. Well acquainted with movement, he threw himself into walls and off of platforms for STREB Extreme Action, an acrobatic performance company from 2002-2006. His videos, installations, and projection designs have been presented at Lincoln Center, the Wexner Center and many other theaters, colleges, and festivals across the country.

Dominique Johnson is a PhD candidate in the Department of Communication and Visiting Instructor in the Gender, Sexuality, and Women’s Studies Program. They are currently working on their dissertation which engages Black.Queer.Femme analytic interventions in rhetorical theory/criticism as related to epistemologies of intelligibility and recognition. Additional research interests include Speculative Fiction fandom, archival practice and theory, Afro-/Black Quantum Futurism, asexuality and affect, as well as non-normative praxes of public address (queer sartorialism).

Maureen Porter is Associate Professor in the Department of Administrative and Policy Studies in the School of Education. An anthropologist of education, she has led service-learning and community-based ethnographic programs around the world. She is co-editor of the volume Indigenous Education: Identity, Culture, and Language (Springer, 2015). She regularly teaches in and about museums. Recently she did a consultancy with the Smithsonian Folklife Festival resulting in a collaborative evaluation of its program Peru: Pachamama.

Hector Camilo Ruiz is a PhD student in the Department of Anthropology and a researcher in the Center for Health Equity at the Graduate School of Public Health. His dissertation in progress is entitled “Polluted Fatherhood: Male Reproduction and AIDS in Colombia.” During his time in Pittsburgh, Camilo has engaged in several projects with the Latino community, a rapidly growing immigrant community that remains largely invisible in the city’s mainstream. He is interested in museums as repositories of memories that can play a crucial role in integrating marginal communities and giving them recognition with dignity.

Kirk Savage (co-facilitator) is Professor of Art of the U.S. in the Department of History of Art and Architecture. He has published widely on public monuments and the memory of war and slavery.

Morgan Thompson is a PhD student in the Department of History and Philosophy of Science. Her primary interests are in theories of scientific explanation, neuroscience other biological sciences, and feminist philosophy. She is currently preparing a course on how race and racism have entered scientific projects throughout the history of science, and their representation in natural history and science museums. She has also done research on the under-representation of women and African Americans in the discipline of philosophy.

Marina Tyquiengco is a PhD student in the Department of History of Art and Architecture working on ethnographic photography and contemporary indigenous art. She has extensive experience in galleries and museums including the Kluge-Ruhe Aboriginal Art Collection, the only museum dedicated to Australian Aboriginal Art in the United States. She was the graduate assistant for the 2015 exhibit Exposure: Black Voices in the Arts at the University Art Gallery.

Jeff Weston is a composer and PhD candidate in Music Composition and Theory in the Music Department. He is at work on a study of the enigmatic composer Julius Eastman (1940-1990), a renowned black musician trained in the classical tradition who developed a politically and racially provocative mode of jazz and experimental composition before falling into obscurity and poverty. Since much of Eastman’s music has been lost or preserved only in nonstandard, non-prescriptive notation, Jeff is particularly interested in the silences, absences, and dissonances in archives and collections.

Ashley N. Woodson is an Assistant Professor in the Center for Urban Education and Department of Instruction and Learning in the School of Education, and affiliated faculty in the World History Center and Cultural Studies program. Dr. Woodson is a qualitative researcher and critical race theorist with research interests in the racial, religious, gendered and sexual dimensions of Black teenagers' civic development in urban communities. She has work published or in press in the Journal of Lesbian Studies, Urban Education, Social Education, Theory and Research in Social Education, and the Journal of Urban Learning, Teaching and Research.